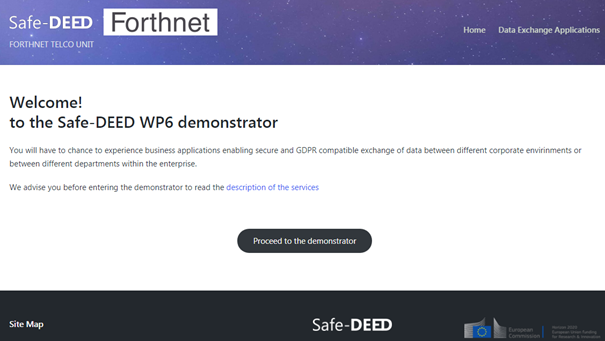 In the second year of the project Safe-DEED implemented the final version of the Personal Data Demonstrator. A version of this demonstrator version will be public and will be implemented beyond the DoA mandates. It will expose the complete functionality with predefined scenarios and datasets to the wide community but users will not be able to upload their own data due to security reasons. Safe-DEED project considers this as a very useful channel to increase awareness and disseminate the project achievements. Such a strategic decision to implement a public version was taken in the project since the research results are considered to be sound and can easily by adopted by the professional community.

The Safe-DEED demonstrator has undergone a major revision from its initial version, both in terms of User Interface and overall functionality and setup.

The first version of the demonstrator aimed at binging together the technology, scientific and business partners. The main goal was to create the initial environment and set the ground for data extraction, exchange and analysis.

In the second version of the demonstrator the focus was based on increasing usability, application functionality and most of all accommodation of respective business scenarios. Last but not least, analysis of GDPR recommendations were taken into account defining respective roles in the scenarios thus imitating entrepreneurial processes.

The demonstrator integrates applications that are built in different programming languages (Python, Java, C) and with different approaches. This approach safeguards openness and expandability of the demonstrator.

A common Graphical User Interface (GUI) has been implemented and the applications have been tested using real data from Forthnet. Currently the demonstrator is installed in Google Cloud and can be accessed via a secure connection.

In the following paragraphs we present this second demonstrator version describing also the supported business scenarios.

The demonstrator incorporates the following applications:

This part of the demonstrator exemplifies the power of private set intersection (PSI) protocols in the context of marketing. In particular, we enable two companies – in our case Forthnet, and another company “C” (e.g. a Bank operating at the same territory as Forthnet) – to improve their own marketing strategy for customers they have in common.

Performs a de-anonymisation risk analysis of a dataset and anonymises it. Despite datasets not containing any personally identifying information (PII), such as name, address, etc., individuals can be identified through their quasi-identifiers (QIs). QIs are the attributes whose combination can serve as a unique identifier for individuals.

This part of the demonstrator describes the initial implementation of the Data Valuation Component (DVC).

The supported algorithms are:

Two main scenarios have been designed and presented:

The URL of the demonstrator will be announced soon.